Say No Be Counted (SNBC) is a latest phase in the overall project:
EDUCATION TO CHANGE THE LIVES OF CHILDREN
IN THE
MUKURU SLUM OF NAIROBI, KENYA.

The Goal
The goal of this phase of the project is to educate the adolescent student on how to protect themselves from unwanted sexual attention and how to intervene to save others.

“Girls will step into MY GIRL POWER and boys will discover THE HERO IN ME. Students will learn how to respect and support one another”   The preceding is taken directly from the Say No and Be Counted program of the Visionary Women’s Centre in Turbo, Kenya.  Through this project Eganville Rotary hopes to create an opportunity for girls and boys to work together and create awareness for the esteem and respect of oneself and others, as it pertains to bullying and sexual exploitation.
Background
By chance, project director, Rotarian Alan Fox became aware of the Visionary Women’s Centre (VWC) in Turbo.   This is a grass roots community based organization is rural Kenya focusing on supporting women and girls.  Alan Fox was able to contact Lizette Gilday, VWC founder, a Canadian living in Quebec.    Through discussion we learned that VWC had already developed a program (SNBC) which was being taught in rural Turbo. The goals of the SNBC program mirrored what we hoped to achieve at Siloam!  With total cooperation between the VWC organization in Turbo, Eganville Rotary’s intermediary, Scolar Mwikali and one trained community health worker made the 4 hour trip from Nairobi to Turbo and attended an SNBC workshop, liaised with the presenters and were given a copy of the SNBC curriculum.
The Plan
After studying the curriculum and discussion with Eganville Rotary, it was decided to adopt the SNBC program. A budget of $7500 is set to accomplish this as a pilot project in Siloam Kware.  The costed budget included:   The Plan in Action
On October 2nd, the teacher/CHW orientation workshop was presented.  There were 25 attendees.
The topics discussed were : 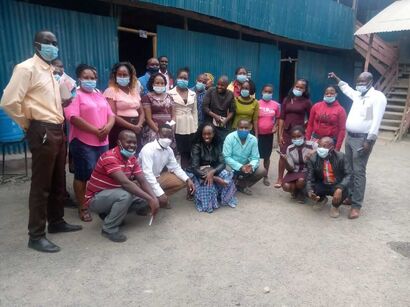 Scolar reports “Teachers agreed there is problem that needed [to be] addressed.  They were happy that Rotary chose to address this issue as they [the problems] were becoming a matter of concern.  They understood that the program was to run even after the pilot program is over.  They came up with ways to continue the program even after we are gone”.
Teachers and Community Health Workers outside Siloam Kware after a successful orientation day of training for Say No Be Counted  October 2nd 2021