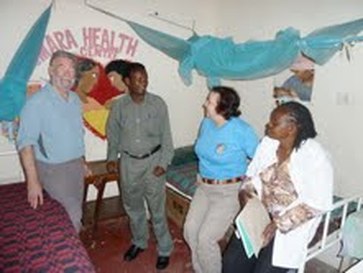 Alan and Mona Fox with Peter Inoti in 2011
In 2002,   Peter and Francisca Inoti established a medical clinic in the Mukuru slum  to provide basic health services to that community.  These included first aid, antenatal and postnatal care, HIV/AIDS awareness and testing, immunizations and community health education and prevention.  The Centre does not receive any direct government support for the services it offers. It relies on income from clients but that is limited as the Centre has a policy to provide service of those in need regardless of ability to pay. Donations from supporters and occasional short term project funding also helps but there is a constant struggle to keep staff when their pay is low and they can earn more elsewhere. Donors include a network of  friends, who in some cases are past volunteers at Imara.   Membership in the Christian Health Association of Kenya (CHAK) enables  the Centre to buy drugs and medical supplies at a discounted price. 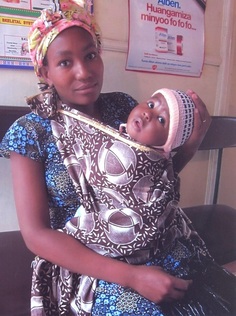 Post natal care clients
Eganville Rotary Assistance
In January 2012, The Rotary Club of  Eganville Charitable Trust signed a working agreement with Peter and Francisca Inoti and the Imara  Healthcare Centre, to provide on-going financial support to the  Centre.
Over the following months assistance has been provided  to upgrade the electrical wiring and install donated LED bulbs, buy used  furniture for a consultancy room, purchase 10 beds and mattresses for the  maternity ward and day clinic. Eganville Rotary has also assisted with the  purchase of badly needed medical supplies and  medicines.
Medical supplies have been donated to the Imara Centre  by the Renfrew Victoria Hospital as well as the county of Renfrew Ambulance  Service.  These supplies have been  taken to Nairobi by students from Renfrew Collegiate Institute and Opeongo High  School, who were traveling to Kenya to participate in a school building  program.

Problem with Drainage
Eganville Rotarians Alan & Mona  Fox visited Kenya  in October 2012 and discussed with Peter and Francisca, their priorities for the future  development of the Imara Healthcare Centre.  They identified drainage as the most  urgent problem to address.  Whenever there are heavy rains, the central  passage way in the clinic floods.  This is not only a health risk but  also a  major expense having to pump the septic tank so frequently.  An engineer‘s report recommended raising the rear part of the building by about  a meter so that water and waste can be fed into the municipal sewer. It was also proposed to install  a concrete slab for a roof to enable future expansion to the second  story.


Pictured below left is the central passage way that doubles as a waiting area for moms and tots.   The centre picture shows the flooding after a torrential downpour.  The far right shows the same passage way after the 2014 renovations. 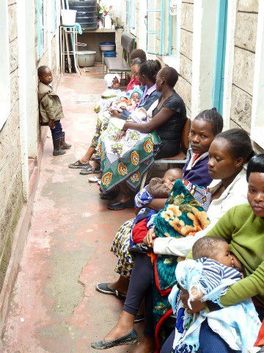 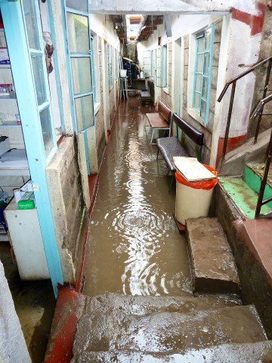 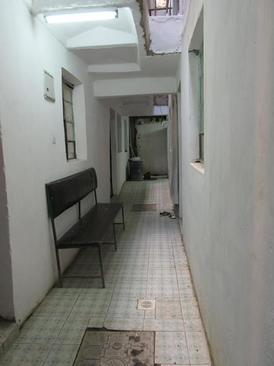 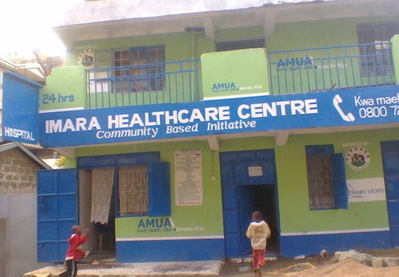 In early 2014 renovations to mitigate the flooding and complete a second story were finished.  This $28K project was a collaboration between Imani Care International (a California based charity) and the Rotary Club of Eganville with support from the Rotary Club of North Renfrew.  The rear part of the Clinic that was prone to flooding was raised by about a meter and the interior of the premises was completely refurbished.  This included upgraded electrical wiring as well as new plumbing for wash basins and toilets which are now connected to the municipal sewer. 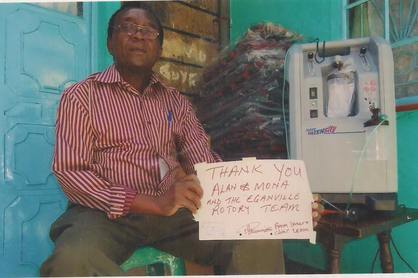 Peter and Francisca’s goal from the beginning was to attain in-patient accreditation with the Kenyan National Hospital Insurance Fund (NHIF) as this would help the Centre become sustainable.
The renovation went a long way to meet NHIF requirements but additional steps had to be undertaken. These included the provision of kitchen equipment, the purchase of 15 additional hospital beds with sheets and mosquito nets and access to oxygen.
The Rotary Club of Chesterville, Ontario made funds available to collaborate with the Rotary Club of Eganville to purchase the beds and the oxygen equipment.

On August 8th 2016 Peter and Francisca wrote:
We have good news! We are very pleased to officially inform you that God has been gracious to us and that we are at last officially on board with NHIF Inpatient. It has been a long journey of prayers, hard work, and patience for all of us. We sincerely THANK YOU for encouraging and supporting us financially as we made improvements at the Imara healthcare facility, which has eventually contributed to this accreditation.

We are optimistic that many community members will equally benefit by accessing quality, affordable and holistic healthcare service at Imara Healthcare Centre.

Peter and Francisca see the evolution of the Imara Healthcare Centre occurring through outreach and education.  They want to put more emphasis on the use of Community Health Workers who can act as mediators between the Healthcare Centre and the population in the different communities in the Mukuru slum. They also want to develop programs to educate and empower young people.

The goals of this project are as follows:

·        Supply them with bags with necessary medical supplies for home visits

The Rotary Clubs of Arnprior, Pembroke and Petawawa and Renfrew have agreed to partner with the Rotary Club of Eganville and contribute funds to this $16,500 project.  Also, the Rotary Club of Milimani in Nairobi has joined the partnership and will provide on the ground oversight. 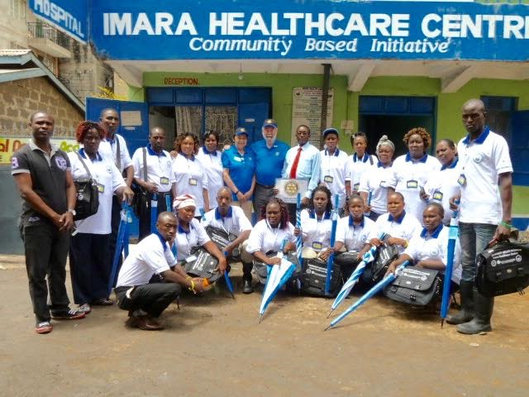 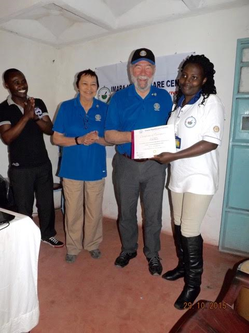 In late October 2015, word was received that the Matching Grant application had been approved.  The CHW course was held in Nairobi and 18 graduates received their certificates.   The graduation ceremony was attended by Rotarians Mona and Alan Fox from the Eganville Rotary Club.  Also attending was Rotary Past President David Rabour of the Homa Bay Rotary Club, Western Kenya.  Past President Rabour was  an instructor on the course.  The graduates were provided with tote bags for their medical supplies when needed for their new duties as well as a uniform shirt and umbrella.  An honourarium of about $25/month is being paid to the graduates during their apprenticeship until the end of August 2016.

In early December, Peter reported that most of the Community Health Workers (CHWs) had been involved with a Polio vaccination campaign in the Mukuru slum. Rotary has a long standing interest in the eradication of polio through it's PolioPlus program which was launched in 1985.

The CHWs responded to an outbreak of cholera in Mukuru in January.  They took a week to go door to door in the slum to tell residents about the importance of hand washing and hygiene in avoiding contracting the disease.  They also went to seven schools in Mukuru and gave the same message to 2,700 students and 175 teachers.

On their visit to Imara, Alan and Mona took with them a Physician's Travel Pack donated by Eganville Rotary.  The amount and variety of the medicines supplied were appreciated at Imara.  Our club's hope is that the CHW program becomes self sustaining.  To that end, the project has built into it, funding  for a  modest stipend for each worker for a period of 9 months.

Eganville Rotary’s next project is to help in the acquisition of equipment for Imara’s Operating Room.  Eganville Rotary has been awarded a District Matching Grant to purchase an Operating Table; an Anaethesia Machine; a Patient Monitor; and, a Suction Machine. The total cost of the equipment amounts to almost $23,000.  Half of the cost will be covered by the District Grant program.  It is expected that the equipment will be installed by the end of March 2017.

In addition to the support from the Rotary Club of Eganville, this project is being supported by a partnership of the following Rotary Clubs:  Arnprior, Renfrew, Pembroke, Petawawa, Shawville, La Fondation Coup de Coeur (Montreal), Sowerby Bridge (Yorkshire UK) and Syokimau (Nairobi)  We gratefully acknowledge their support as well as the generous contributions of many individual donors.

A large part of Imara’s business is the reproductive care of mothers and their infants. In the case of complications in the pregnancy they will now be able to do caesarian sections.  The acquisition of this equipment will increase the safety of mother’s having babies in Mukuru and will improve the medical infrastructure of the slum community. 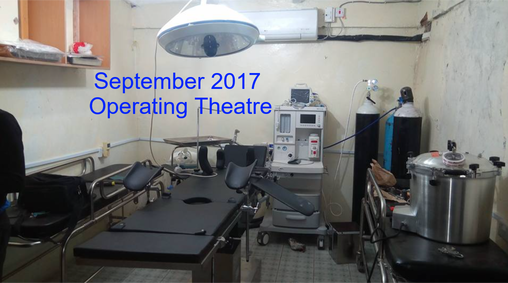 A large part of Imara’s business is the reproductive care of mothers and their infants. However, at present, if there are complications in a mother’s pregnancy, she has to travel a number of kilometers to either the Kikuyu Hospital or the Mama Lucy Kibaki Hospital.  Having a fully equipped community based Operating Room in Mukuru will save lives. In the case of complications in the pregnancy, the Imara Centre will now be able to do caesarian sections.  The acquisition of this equipment will increase the safety of mother’s having babies in Mukuru and will improve the medical infrastructure of the slum community. 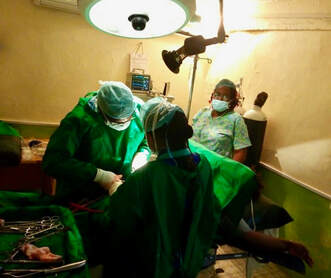 Our fundraising in 2018 enabled us to purchase three pieces of equipment: a second patient monitor for the post-natal ward, a baby resuscitator and a baby incubator.  We received the news over the Christmas holidays that we have been awarded a District Matching Grant for the equipment purchase.  When we told Peter and Francisca about the grant, Peter wrote, “What wonderful news. The news sounded like sweet music.  This is truly a New Year gift for Imara”.  It is also a gift to the Mukuru community who will benefit from the increased security of patient care.  Thank you to the Rotary clubs of Arnprior, Renfrew, Petawawa and Montreal as well as CUPE and an anonymous donor.

some 500 baby caps ready for Imara newborns!
April 2019 Update
Alan and Mona were  in Nairobi to visit the Imara Healthcare Centre and to help to kick start the Siloam School Project.  While at Imara, Alan and Mona  presented the more than 500 knitted caps for newborns created by Mona and a large network of volunteers.  They also did, on behalf of Eganville Rotary and the Rotary Club of Syokimau, Nairobi, officially present the neonatal operating room
equipment purchased for the Centre in January.

On April 6th,  Alan and Mona along with Syokimau Rotary members
President Major Boke, Dorothy, Isabella and Felisitas (our three guests
on Canada Day 2018) were at Imara.  There, Peter and Francisca
showed off the newly acquired baby incubator and baby
resuscitator as well as the surgical instruments and trolley provided by
the Syokimau Club.  Peter Inoti, Healthcare Centre Director praised
Rotary's partnership with the community health service since 2011.  The
some 500 donated knitted hats were left at Imara for the yet to be born
Mukuru babies.

Francisca Muthoni, the Senior Clinician at Imara has reported that as
the only facility in Mukuru, Nairobi with an Operating Theatre, the Imara
Centre receives referrals from other private and public centres. The
Centre reports that 124 infants have been delivered so far this year.
The Centre which was struggling to stay afloat in 2011 is now a busy,
vibrant health facility meeting the needs of the Mukuru community.
Since January this year it has attended to over 4,000 outpatients 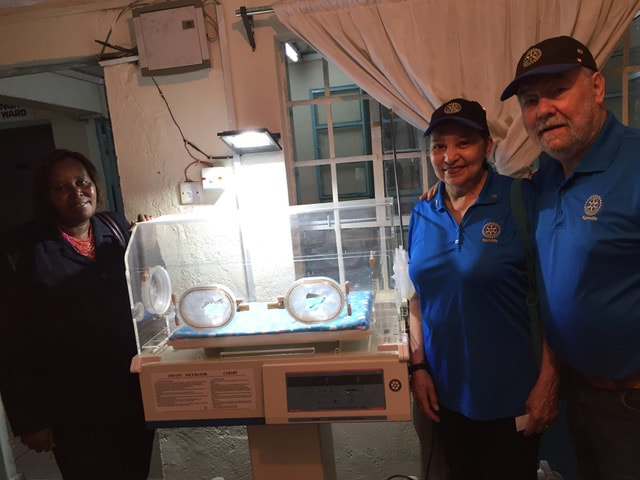 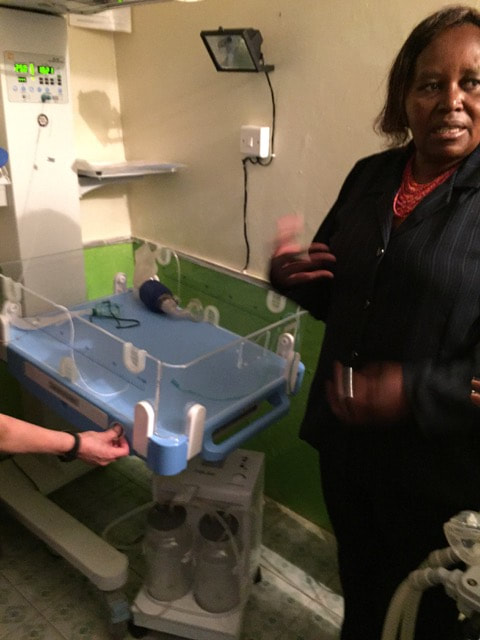 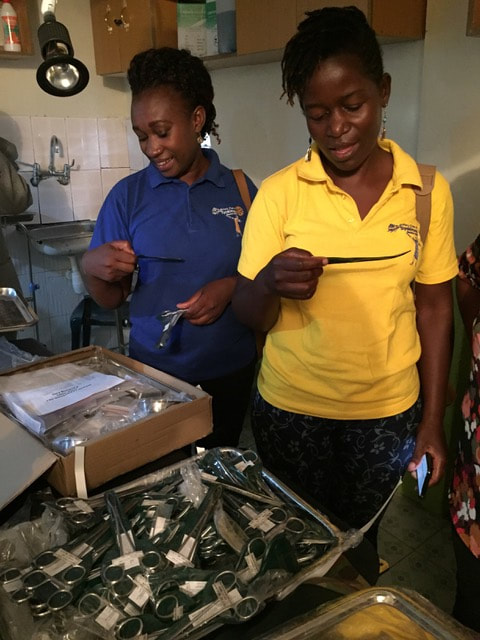 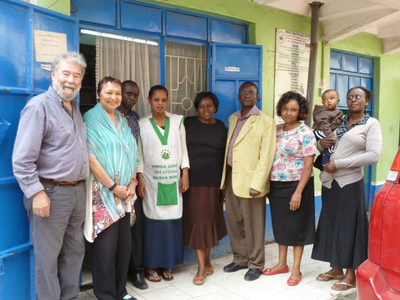 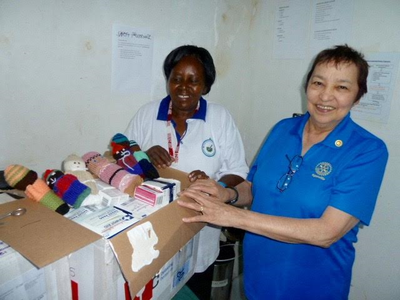 Your support for this project is needed!  Canadians can receive a charitable receipt by sending a cheque to the Rotary Club of Eganville Charitable Trust at:  PO Box 788, Eganville, ON  K0J 1T0.  Others may contribute through the PayPal link at the bottom of this page.
DONATE NOW 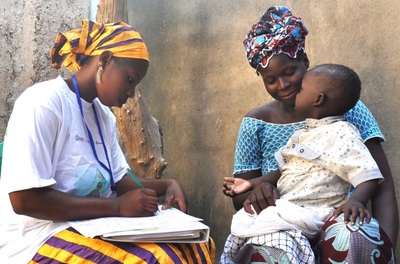 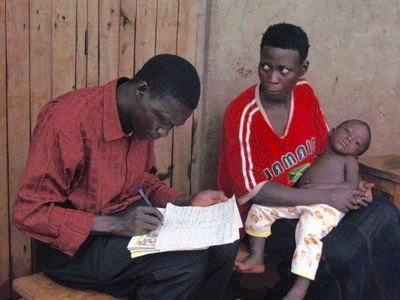 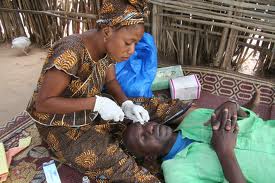 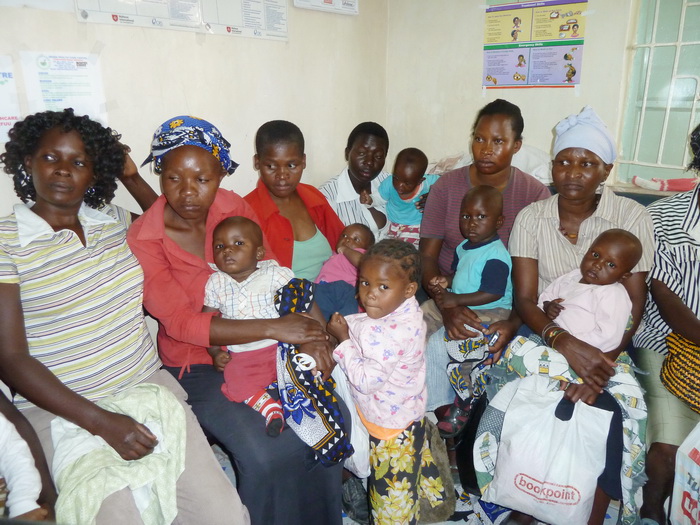