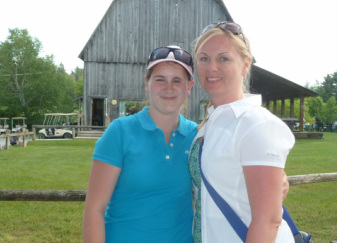 Danielle and her Mom, Amber
At age two and a half, Danielle was diagnosed with a rare, stage three, bone tumour  called a PPNET (Primitive Peripheral Neuro-ectodermal Tumour), behind her left  eye.  Danielle underwent neurosurgery to remove 75% of the  tumour, and  one more surgery to implant a Hickman Broviac catheter (this  procedure was  repeated twice).  9 days later we  began her 58-week protocol of  aggressive Chemotherapy and 33 radiation  treatments.  This led to multiple  infections and numerous transfusions over the course of her 1+ year in  hospital.

Danielle beat all odds, and, 14 years later, she can  stand proud as a cancer survivor!   However, aggressive treatments like the ones Danielle had  at the critical development stages of 2-4 years old,  caused many challenges for  her in the years to come.

Since her last  Chemotherapy treatment in May 1999,  Danielle has been followed annually in clinics at CHEO (Ottawa)  and Sick Children's (Toronto),  to monitor her development and complete restorative procedures necessary for her  to move
forward as the developing young lady that she is today.   She  has overcome many medical, academic and physical barriers and crossed many  milestones since, as she became highly involved in sports community and school  groups and been part
of a mission to support children and families in third  world countries.   As a survivor of 14 years, she continues to be seen annually in 8 clinics at CHEO and  since 2009, two clinics at Sickkids hospital in  Toronto  where she has had four reconstructive surgeries to repair the cranial, facial  and orthodontic damage as a result of the radiation treatments.   In addition, she has undergone cataract surgery and Optic Lens  Replacement, Opthamolic Laser surgeries, Ear and Cardio  surgeries.

Currently, she is in the process of  oral reconstruction  at CHEO and has completed two of the three surgeries required to remove all of  her adult teeth (as her roots did not develop due to  the radiation), reconstruct her upper jawbone and place implants before adding the bridges in hopes of  reverting back to a ‘normal’ diet by 2014.

She  also requires daily hyperbaric treatments, before and after each surgery, at the  Ottawa General Hospital Campus.  She has had 50 treatments thus far to increase oxygen levels in her blood  and enhance the tissue reproduction in hopes of the irradiated bone accepting  the implants  The doctors are very  pleased with her progress thus far!

The cost estimate to complete this course of treatment  is in the $60,000 range!  These treatments are not covered by any government or private health insurance.  That is a heavy financial burden for any family to bear.

Danielle is now a vibrant 18 year old.  The Rotary  Club of Eganville  also believes that Danielle deserves the dignity of a healthy  smile, and the pleasure  of selecting meals according to what she wants, not what she can chew.  To that end a fundraising golf tournament was held June 15th  2013.  See the results on the 'charity golf' page 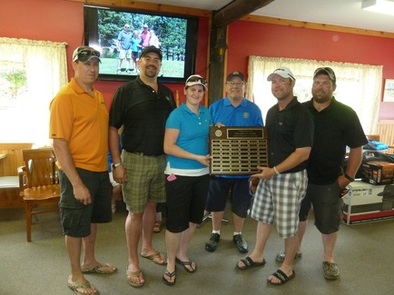 2013’s event saw 96 golfers tee-off for the annual charity event held at Indian River Golf Course, Pembroke.  The sky was clear and the temperature perfect for golfing!  An additional 30+ people came in for a BBQ supper.

The proceeds this year go to help with the cost of the dental rehabilitation of Danielle (see Danielle's Story)  Her family is facing costs estimated at $60,000.00 to complete her course of treatment  started some 14 years ago.   The then 2 1/2 year old Danielle was diagnosed with a rare bone tumour behind the left eye.  Her treatments lasted more than a year.  Despite a dim prognosis, Danielle beat the odds.
However,  when she received the radiation and chemotherapy treatment, she was a growing child.  Damage was done to growth centres which  needed many corrective surgeries.  The family is still facing monstrous medical bills that are no longer covered by private or government insurance.  Rotary was asked to help.

After all was said and done, just short of $7300.00 was raised.  These funds are being used to pay an outstanding medical bill.   The balance will to be held in trust by the doctors and be applied to cost of future surgeries.  Much thanks go to a generous community!